As I am wondering why I have not shared more about my favorite place in all of Hawaii, I realize it is because it is so difficult to express just how special the Mokulua Islands are. These islands are the place I think about when I think about Hawaii and this beautiful rock that I live on. Maybe I have just been waiting for the all around perfect day at the Mokuluas to attempt to describe this haven justly. A day in which I get to visit this island through fresh eyes, witness all of its creatures, and share it with a special combination of people. If that’s what I have been waiting for, this day was it.

Part of what made this day at the Mokulua Islands so special was that I had the pleasure of bringing my long-time childhood friend, Jackie, along for the day. While the plan for our day off together had been to go for a hike, we woke up to a cloudless, windless, stunningly beautiful day. Unlike the dreary, blustery, windy days that made up most of November and early December, this bluebird day was an anomaly. Due to the day’s conditions it was decided: we were going to the Mokuluas. Clay, Jackie, and I drank some coffee, packed some PB and Js, and headed to work to grab some stand up paddleboards. We met up with our friend Andy and made our way to Lanikai – ready hit the water.

It was Jackie’s very first time on a stand up paddleboard, and she did beautifully!  As we paddled out in Kailua Bay, two sea turtles breached, lifting their heads above the water for a gulp of air. (This is my favorite moment when encountering sea turtles!) We landed on Moku Nui and basked in the sun, taking in the views of the entire coastline of windward Oahu.

Jackie and I grabbed our snorkel gear to go for a swim. Immediately after entering the water we were surrounded by two sea turtles, then three turtles, and then four. We watched as they ate algae, visited the surface, and swam about in Kailua Bay.

Clay and Andy caught the most epic waves between the two Mokuluas. It was decent size surf, and although Jackie was a pro for her first time stand-up paddleboarding, we opted out of surfing after watching Clay get thrown on his head a time or two. As I began to show Jackie around to the Queen’s Bath, we nearly overlooked a sun bathing monk seal. He’s in the photo below – let’s see if you can spot him!

We hiked around to Queen’s bath where Jackie jumped in the invitingly calm, six foot deep natural pool. We took in the vast ocean views, watched Clay catch a couple more head-high waves, and returned to the beach for some lunch.

It was an odd phenomenon – catching up with an old childhood friend some 5,000 miles away from our homes due to unplanned events. It always amazes me how easily conversation flows with certain people, even though long spans of time may have passed. The last time Jackie and I spent time together was in 2009, doing something related to our high school’s field hockey team. Seven years later we were wandering around Oahu’s offshore islands like we hadn’t missed a beat.

I want to share a little more with you about Jackie – because this girl is really cool. Jackie and I first met through church growing up in Vienna, Virginia and later were high school field hockey teammates. Out of the blue just a month ago, she reached out to me saying she and a friend would be coming to Hawaii. Since arriving on Oahu, her plans changed a bit – at which time Clay and I had the opportunity to host her! 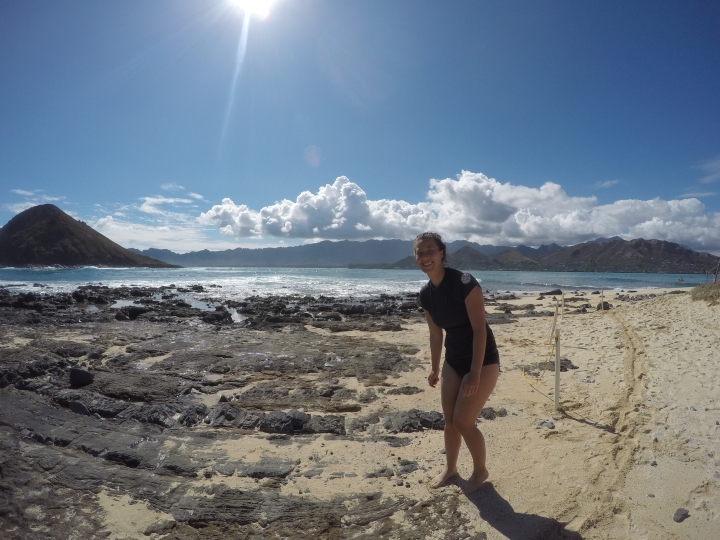 We had so much to talk about and so much catching up to do. She recently quit her corporate job to follow her dreams. She is letting go of the things we sometimes feel we are “supposed” to do to make room for what she wants out of life. Clay and I had a blast hanging, watching Christmas movies, baking, and paddling with her. This girl is so easy to connect with and just happy to be. Long story short, Jackie inspires me. Follow her journey and check out her blog, Planting a New Seed, here.

In the meantime, let’s hope for more of these stunning December days and magical trips to the Mokuluas. It’s the holiday season, friends! ❤