A couple of months ago on a beautiful North Shore morning I found myself willingly exiting the safety of a boat to enter into shark infested waters.

Funnily enough, one of the first things that Clay and I did upon making the move to Oahu, Hawaii was to get up close and personal with the exotic apex predator – the Galapagos shark. The desire to see this foreign and powerful creature up close and personal piqued our interest, and so we sought out a “shark adventure”, from the safety of a cage, of course! Just a few weeks after our first cage dive shark encounter was when I first heard of One Ocean Diving‘s cageless shark dive. My hair stood on end and the word “insanity” came to mind.

Yet two years later I found myself actively making plans to go swimming with the sharks. Uncaged. Why the change of heart? While my friends were very encouraging (and I had heard great and wonderful things about One Ocean’s program), I wanted to witness firsthand the ideology that sharks don’t associate humans with food. This idea lends itself to the belief that attacks on humans are results of mistaken identity. These personal and first-hand experiences and interactions with sharks support One Ocean Diving’s mission to change our perception of sharks from man-eating monsters to important players and essential regulators in our ecosystem (that is now rapidly changing). Fascinating.

And so at 4:30am on a Wednesday morning in March, Clay and friends Natalie, Nicole, Ryan, and I headed to the North Shore to catch the first boat of the day. We met at One Ocean Diving’s boat and met with their team of divers – all of whom were friendly, competent, and interesting individuals – GE in particular. On the boat ride out, the instructors described in detail the behavior of sharks, their habits, and how to properly interact with them. 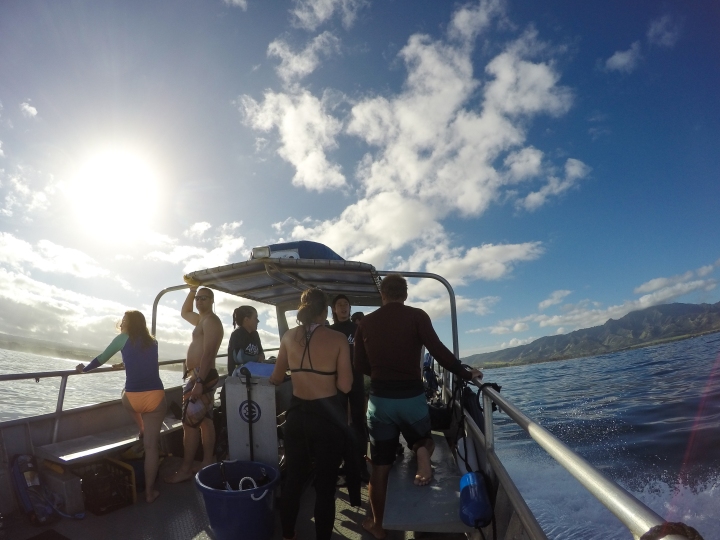 The more I listened, the more I learned. I was getting more excited (and at times more nervous) to enter the water with these creatures. The boat arrived to its destination and GE promptly hopped in the water. We were told to wait on the boat while he asserted his dominance and established the dynamic of the human and shark interaction. (This is actually fascinating to learn about – the hierarchy within the water column.)

Once I quietly and gently slid into the water, I peered down to see about 30 sharks 50 feet below me. We watched in awe as they swam past us, checking us out in a curious but surprisingly dis-interested and non-threatening way. As I swam with sandbar sharks and galapagos sharks below me, I continually looked for any of the agonistic behaviors that One Ocean alerted us of including lowering of their pectoral fins, parallel swimming, and gaping or upper jaw protrusion. At one point, our friend Ryan dropped a GoPro on the boat. This made a loud, jarring noise as it bounced off the metal interior of the boat, suddenly making us more interesting and perhaps intrusive to the sharks. GE then firmly and assertively told us to swim back to the boat as the sharks were suddenly hyper aware of our presence and displayed slightly agonistic behavior. 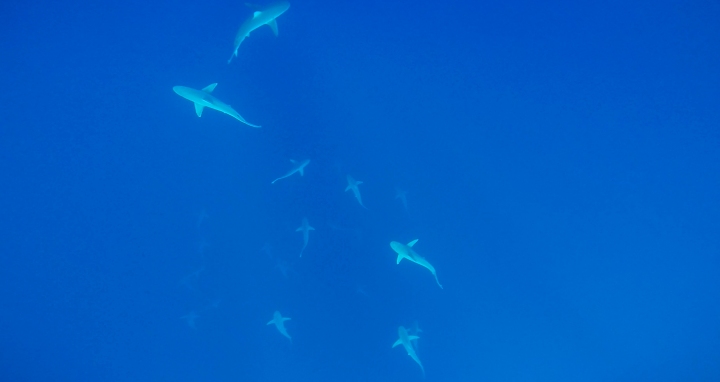 Five minutes later we were back swimming off the side of the boat watching these creatures from a distance as little as 10 feet. For the remainder of the time, we were instructed on when we could swim down to get a better look at the sharks. At this point, we could also hear the songs of nearby humpback whales and later dolphins. As the dolphins approached, the sandbar sharks and galapagos sharks made themselves scarce until the dolphins passed by. 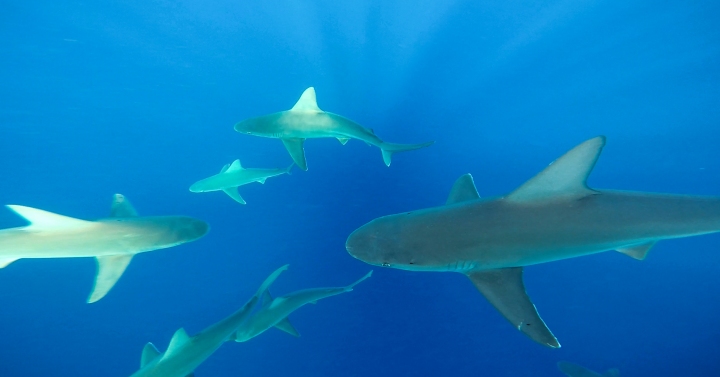 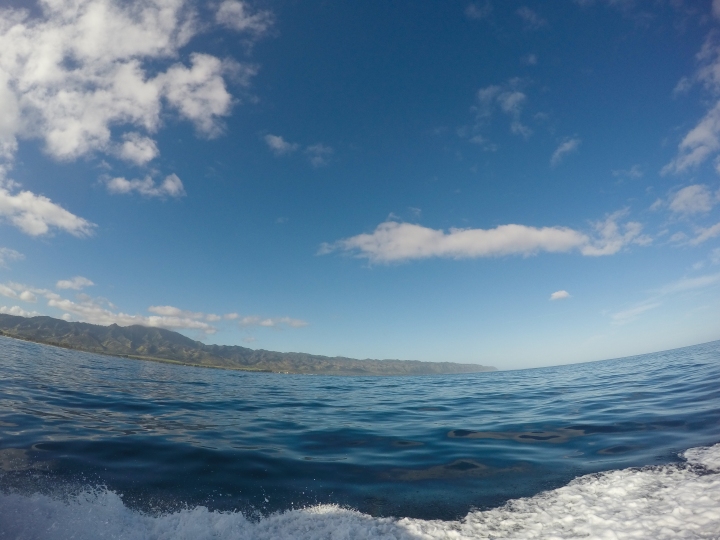 By 9am our adrenaline was done firing and we were heading back to the North Shore. A whale breached 100 yards beyond us on the return trip home. Everyone was all smiles having encountered this important creatures and returning with a newfound knowledge and respect.

For anyone interested in learning more about One Ocean’s mission and Ocean Ramsey’s research and work, check out this Ted Talk.

One thought on “Swimming with Sharks: Uncaged”