Last fall, I stumbled upon an amazing community of individuals and embarked on an adventure to learn a new sport: rowing.

I notice an intensified satisfaction with life when water is more heavily incorporated in my day to day existence. Currently, I am reading a book called Blue Mind that discusses why water makes us happier on a neurological, evolutionary, and biological level.

My love for water has led me to several communities that celebrate engaging with Earth’s greatest miracle. In college and for the couple of years that followed, I was enveloped in the whitewater community. In Hawaii, I fell in love with sailing and the amazing community of people that love to be in and on the ocean. And in Greece, I discovered rowing and the fun-loving, warm, and dedicated group of individuals that makes the Coastal Rowing Club what it is.

It took me two months to find the Coastal Rowing Club in Thessaloniki, but I noticed rowers on the water from day one as I looked out from the balcony of my new home. 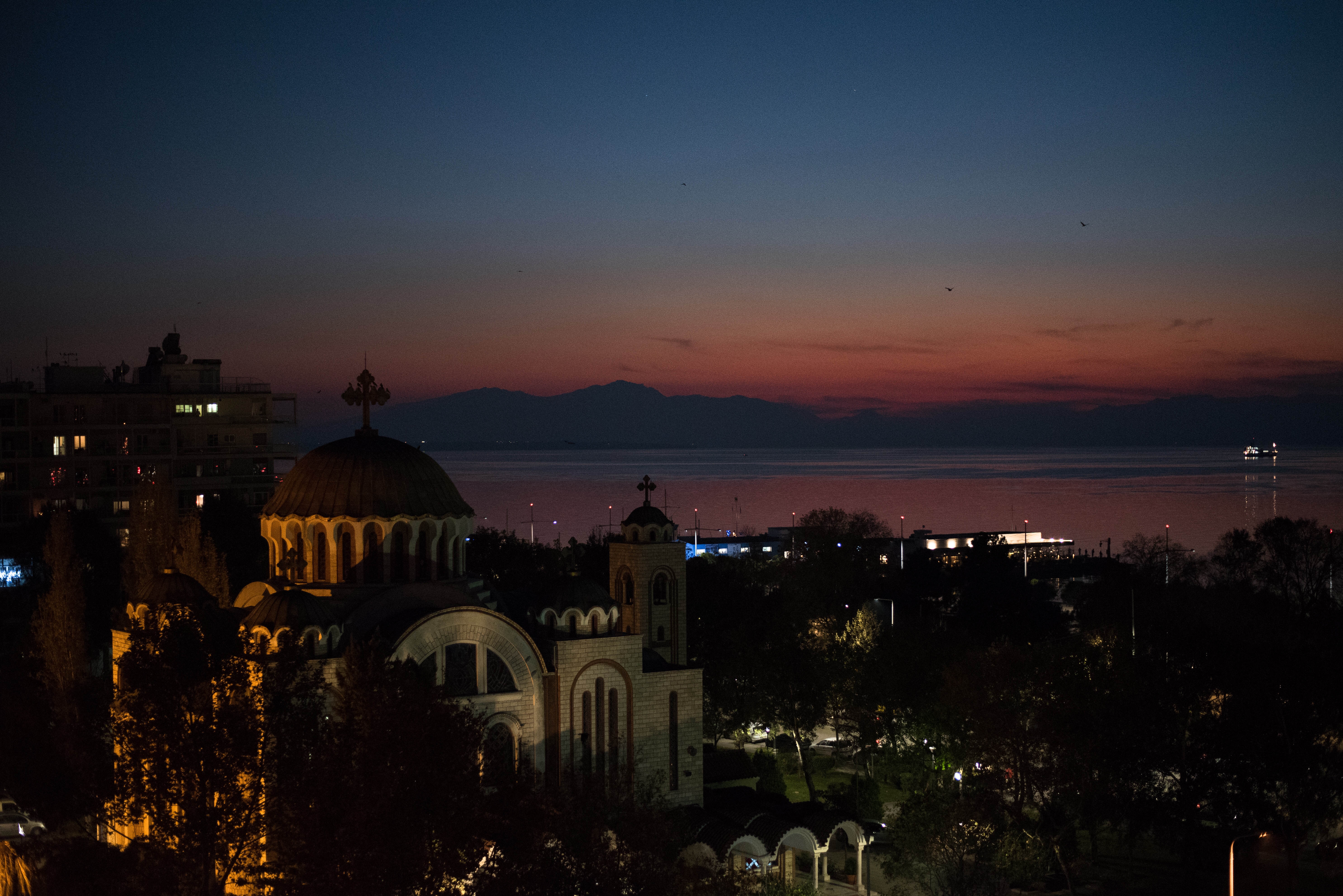 I began to ask boat captains around the city’s renown boardwalk how I could get involved, but was told that “it [was] only for athletes.” Locals said it with such confidence that I left it at that and took to running and doing Kayla Itsines’ workouts with my friend, Juliana, admiring the rowers from afar.

This circumstance reminds me of the following quote: If you really want something, you’ll find a way. If you don’t, you’ll find an excuse.” As I was still learning the ropes of a new job, building relationships with students and staff, and finding my way around a new city, the timing wasn’t right and I readily accepted a no as my answer.

Finally, by November I found myself slacking on a routine and getting a bit fluffy (thanks to the feta cheese)! After returning from Santorini for a weekend with my family where I was reinvigorated by being in and around the water, I was committed to give the rowing club a phone call for a more official answer on my ability to participate. 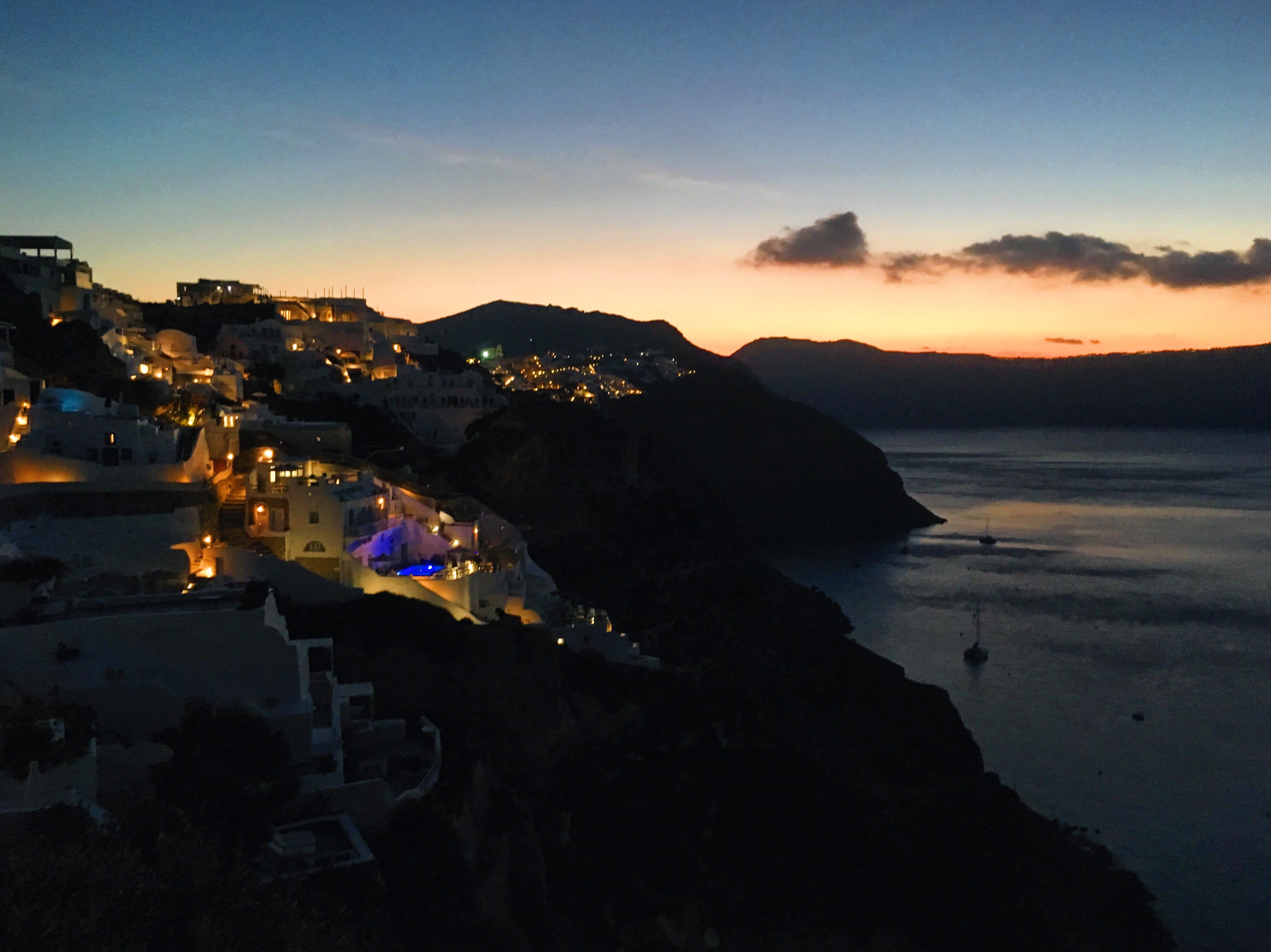 Nikos answered the phone, who I soon learned was the owner and one of the coaches. He encouraged me to come in for a free workout to see if the program was a good fit. Day 1 was intimidating, but I was quickly greeted by the warm smiles of the coaches, Marialena and Vasilis. Sometimes smiles were all that were exchanged because of a language barrier, but it was more than enough. After a week, I was no longer known as the American and I began to learn the names of my teammates as they began to learn mine.

Marialena worked with me most. She used to row professionally, and we happened to be exactly the same age. On my first day in the rowing simulator pool, my new coach said to me, “Either you are really good, or I am!” in the fun-loving way that she perpetually embodies. I credited my kayaking experience for my ability to pick up the rowing mechanics rather quickly, but she, Vasilis, and Nikos are truly excellent coaches.

With only a month and change left before my departure from Greece, I was determined to graduate to being on the water as soon as possible.

My mornings with my new Greek friends quickly became a favorite part of my day. Whether I was gliding above the Thermaic Gulf with my rowing partner, Ourania, enduring a grueling workout on the ergo machines, or completing a circuit workout, I was overjoyed for the challenge of learning a new sport and to find a group of people that shared many of my values and goals.

My morning runs were now spent alongside my new teammates, Efsevia and Dimitris, before our conditioning workouts. They were the first two people that I met in the club, and they eagerly paired up with me for circuit workouts and quickly became new friends. I learned later that Efsevia thought I spoke far more Greek than I did. As she spoke to me my first several mornings, and I nodded and intently listened for familiar words. She later learned from a teammate that my Greek was very limited and that I didn’t understand much from our conversations! 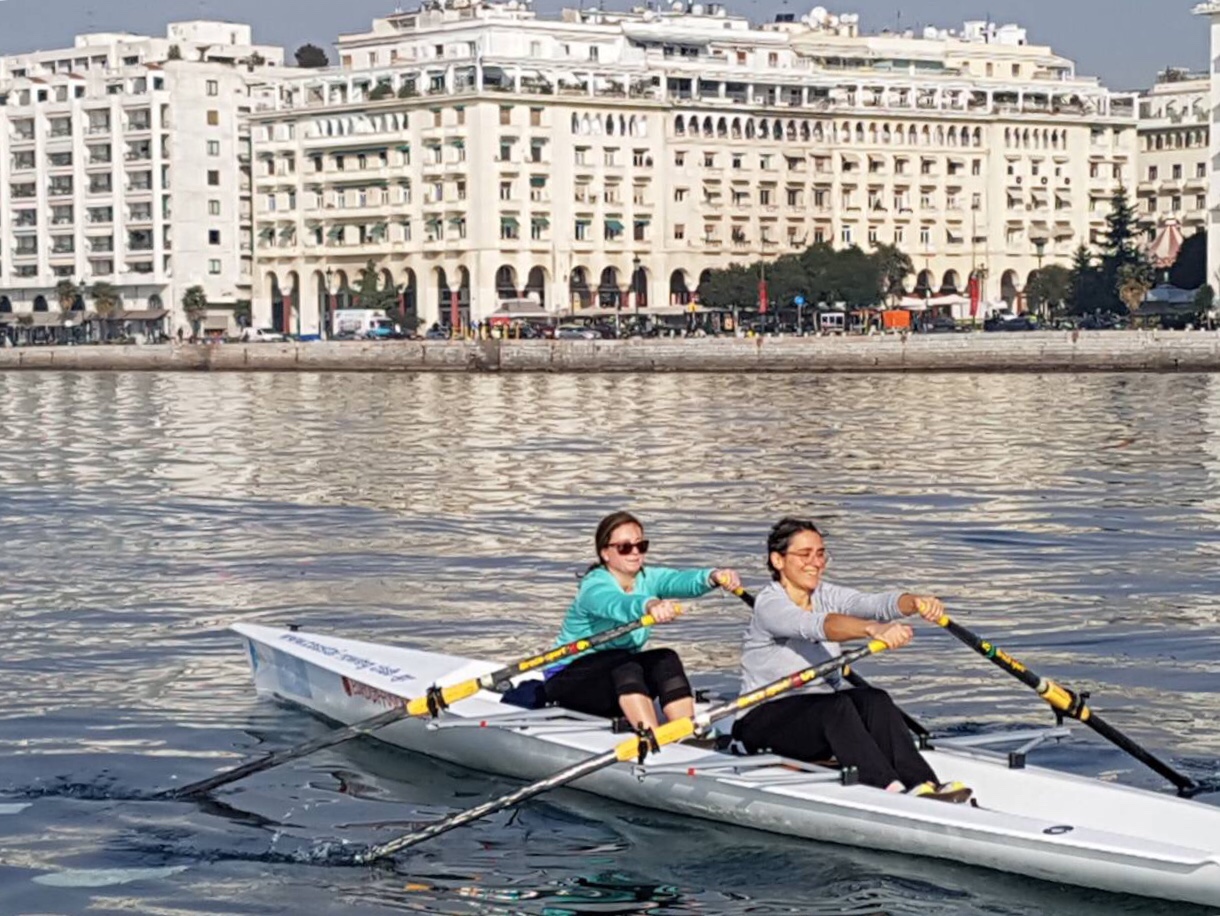 These warm, playful, and passionate athletes reminded me so much of the communities I had been such a part of before. Regardless of which sport is being pursued, or where the community exists, there is a likeness in the types of people that congregate in the presence of water.

The rituals change, but the communities are in many ways the same. After a sailing race in Hawaii, poke is passed around person to person as we sit in the cock-pit talking story and sharing laughs. | After a trip down the river, beers are cracked at the takeout and food is on the mind. | And in Greece, coffee is a ritual in itself and my teammates and I enjoyed ourselves for two hours at a cafe on a Saturday morning after rowing. 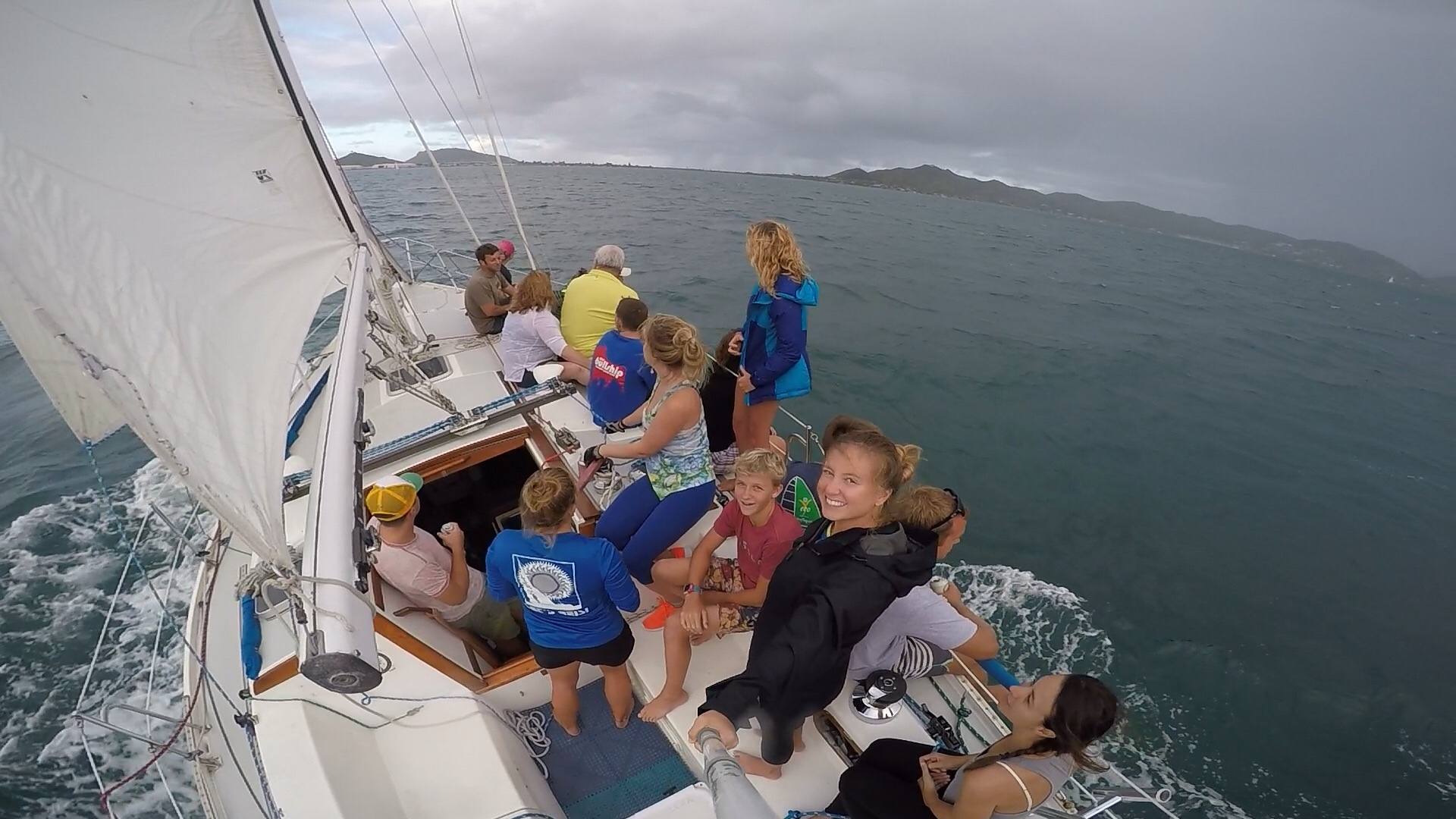 On my last night in Thessaloniki, the Coastal Rowing Club threw me a goodbye party. After what would be my last rowing workout for the time being, folks turned the training center into a party-cafe and brought beer, liquor, snacks, and more. This photo was taken before the disco light came out.

I miss you, friends! Thank you for taking me in as one of your own and for teaching me about the great sport of rowing. 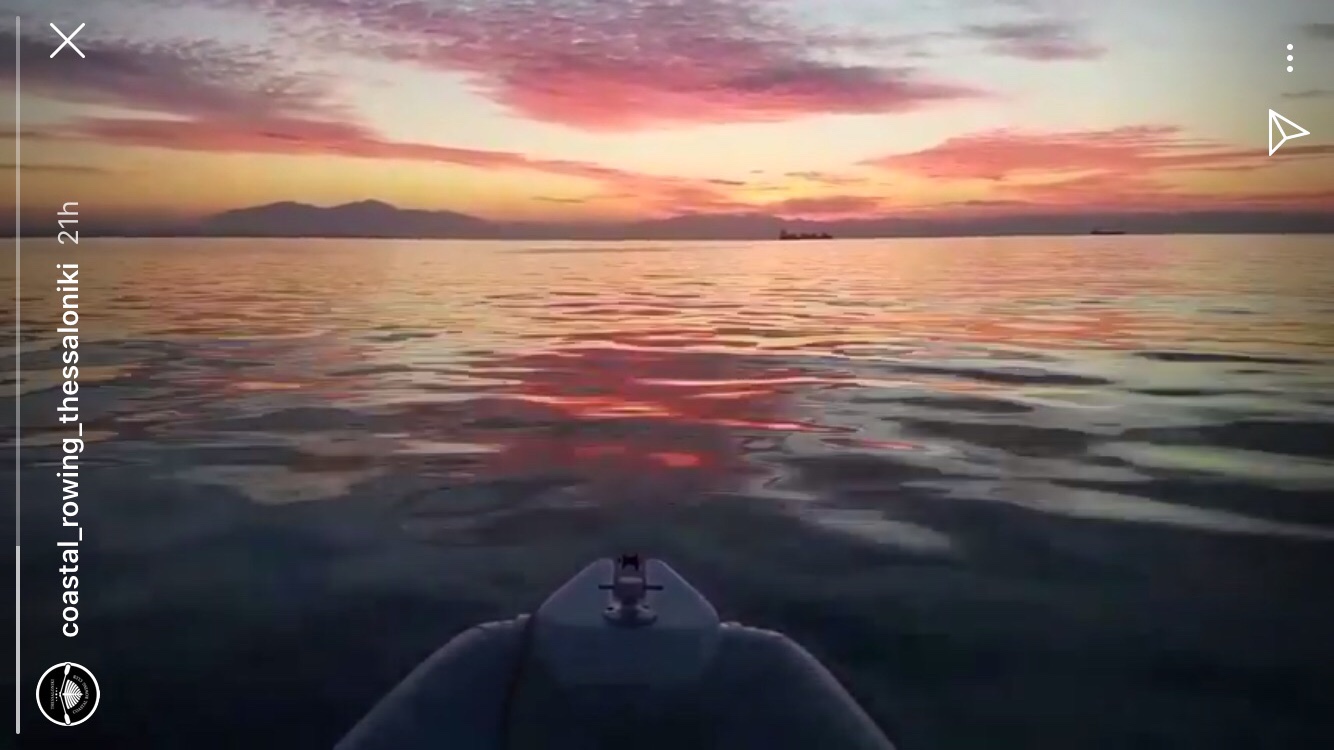 One thought on “Something in the Water”